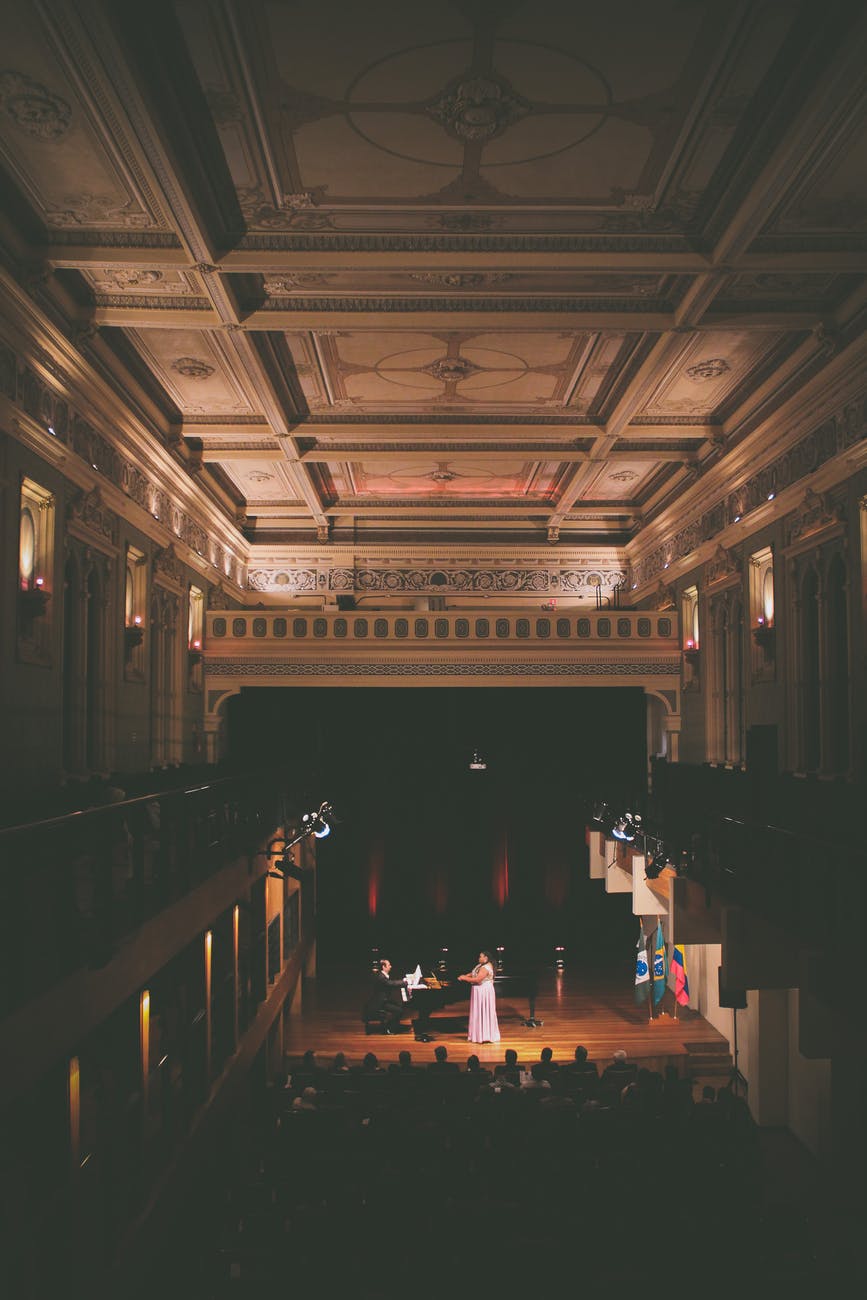 When I was a child and a young teen, I loved theater and music and ballet. Most of my daydreams were about some day pursuing it professionally. But when I was around 16, I really felt as if I began to understand that God was real, and he had a will for the Earth and for me. I was overwhelmed at the repercutions of this thought, and that the proper response on my part was to “find out the will of God, and do it wholeheartedly.” (As Maria said in The Sound of Music.)

In my earnestness and naivety, I decided that pursuing the Fine Arts was probably out of my own pride and selfish desire to be on the stage. So I threw away my Shakespeare books, my pointe shoes, and my showtune CDs. I wanted to be sold out for the Lord.

I threw myself into working at the church- I did anything and everything, I was there whenever the doors were open. I taught Sunday school and kids club, I worked in the nursery, I was on the worship team singing, playing flute, guitar, piano, bass, even violin badly. I took a turn cleaning once a month. I hosted a small group, I wrote and coordinated a VBS and a few Christmas plays. In the summer, I worked at a Christian Camp. As I got older, I was an assistant youth leader, a worship team leader, a ladies bible study teach, and after school Bible club coordinator.

I married fairly young and had three children immediately, and before very long I was homeschooling them. I was still often, and always doing everything I could for the Lord. I mean… every so often, I would remember things like ballet and art and music, and I would feel a little sad because I didn’t have it in my life. and honestly, as the years went by, I began to feel not just sad but a little… Miffed. I began to notice that there were Christians who love the Lord wholeheartedly who were pursuing Fine Arts. Going to college for it, pursuing careers in it, even working in the church with it. But I was a stay-at-home, homeschooling mom, and I felt as if I had foolishly made a sacrifice that was unnecessary and unnoticed.

Psalm 37:4 says, “Delight yourself in the Lord, and He will give you the desires of your heart.” it’s a verse that a lot of us learn while we are very young, but as the years went by, I began to feel as if the Lord had forgotten me. That I had given him the thing I loved best, I had thrown my lot in after him, and in return he had forgotten me.

Don’t get me wrong, I love my children. I have spent 16 amazing years with them so far and I would not trade any of the time I have been blessed to spend with them. I thank the Lord everyday for them and for my husband, and I am not unaware that there are women who will never enjoy such a blessing as I have in them.

7 years ago, we moved to this area, primarily because my husband had always wanted to pursue more agricultural endeavors, and we would have land to work with. At that time, the Performing Arts and Fine Arts were, to me, completely off the table of my life. I was trying at that time to accept that they were never going to be a part of my life. I had given them up, foolishly or not, and I just needed to come to terms with the fact that they were never coming back.

I was not having an easy time of it. I was trying so hard to be this person I thought I should be, but the harder I tried, the more I failed.

One day, I went to visit a friend who lived in the area. she had a very large Garden in her backyard, and we were walking by admiring it. I also had a very large garden at the time. When I say large I mean a half an acre. at the time, I tried to plant, tend, weed, harvest, and can all of our vegetables every year, and I hated it. Every part of it. but I would grit my teeth and try to make it happened, because for some reason I thought that’s what I should do. well, on this day, as I was walking with my friend admiring her garden, I was trying to figure out why her garden was so beautiful and mine was never. I asked her how much she worked in her garden. You see, I used to set my timer and tell myself that I had to work in the garden for an hour everyday. I would go out there and weed and rake and hill potatoes, and I would watch the clock go and just wish for the hour to be over. But no matter how disciplined I was, my garden just never looked as nice as hers did. And so finally I asked her how much time she spent in her garden every day. Was it half an hour? Was it an hour, was it 3 hours? What would it take, what would I have to do to succeed at this Garden thing? And do you know what she said to me? she said, “Oh, I have no idea how much time I spend. I’m always out here. I just find myself wandering out here and before I know it hours have gone by.”

Something clicked in me right then. I realized that would never happen for me. My heart wasn’t in that garden.

Something shifted in me that day and I begin to realize that I was not my friend. I was never going to be that farm wife that I was trying so hard to be- and it was okay. It was more than okay! Somehow, at that point, something started to wake up in me that said that it was not just acceptable, but good if I begin to understand who I was created to be.

The strangest and most wonderful part of this story today is that in the middle of this very rural area of New York, in a place where you never think there would be, there is a performing arts center that is so excellent it is astounding. In the last few years I have sung in the concert version of Les Mis, played Miss Hannigan in Annie, and tonight closed the last performance of my second Christmas musical- and that’s not all. Besides being full of talented and skilled professionals, it is also a ministry that bases every production, class, and performance on proclaiming the good news of the Lord!

I can’t over emphasize how unusual this is. The performing arts department at Family Life, in a little town that happens to be a short drive from my house, is easily as good as the theater companies in most small cities. It has been an honor to have the privilage of being part of their productions.

Before a performance, as the overture is playing and I am waiting to go on, I stand in the blue light of the wings, looking up at the tall velvet curtains, with a hundred million particles of joy pulsing through my veins- because every happy dance number, every beautiful chorus, every satin costume and silly prat fall and tender dramatic moment feels like one after another after another shining, bright Christmas gifts from the Lord directly to me- Him saying, “I didn’t forget you. I didn’t take lightly what you gave up so long ago. Look what I was planning this whole time.”

All these years where silly me was thinking he brought me to the desert to die, He was always preparing a place for me.

Truly, truly. He gave me not only the desires of my heart- but in all these years, he has become my delight. I really, truly believe ever word of the familiar Psalm-

The Lord is my Shepherd. I truly have no wants. He has brought me to lie down in green pastures, He leads me beside the stillest waters. He restores my soul.

He leads me in paths of righteousness for his name sake. He prepares a table before me in the presence of my enemies, He annoints my head with oil.

My cup runs over.