If you’ve been on pinterest or tumblr or even facebook for more than a year, you’ve probably seen this quote by Oscar Wilde. 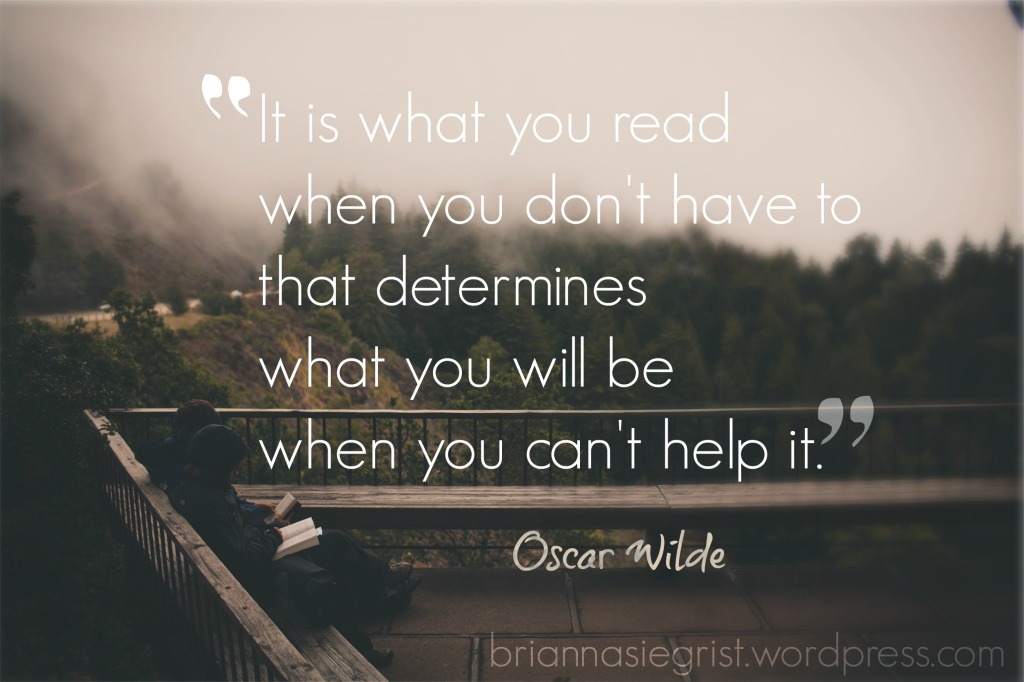 Maybe you love it. Maybe you’ve pinned it. You’re thinking, “That’s so true! I’m glad I’m a reader!” Pat yourself on the back.

You feel guilty, stupid, or just condemned as you scroll past this image. It’s just one more thing you don’t measure up in.

This quote is by a man named Oscar Wilde. He lived from 1854 until 1900. In his day, books were both the means to be educated and one of the most popular forms of entertainment. Almost all media was books, or at least- the written word.

I’m not saying books are out-dated. I love books.

What I’m saying is that when he was cryptically cautioning people to carefully consider their reading choices…. (Whoa. I did not even choose those C words on purpose. Spontaneous alliteration FTW!)

…He was reminding them to be aware that their entertainment choices affected the rest of their lives.

You see- your school and your parents and your work will do so much to try to shape your identity. But you’re ultimately the one who chooses. And your choices are often made not when you’re looking through college applications. They’re made little by little, in your free time.

Because every day you choose what to turn your face to- whether its to learn Spanish or to watch Spongebob.

And the choices you make not only reflect you are, they shape who you will be.

The movies, sitcoms, webcomics, novels, and videos you watch are all telling stories- and those stories are meaningful. They reflect messages and themes that the creators want to communicate to you.

But too often we choose our entertainment because it’s… entertaining. It’s funny, it’s trendy, it’s heavily promoted on Hulu. We watch entire seasons of stupid shows because we’re moderately interested in whether Ross will end up with Rachel, and because netflix autoplays the next episode.

It’s so hard to choose our entertainment purposefully… But we have to. If we don’t, we become merely a pawn in the hands of whoever is the funniest, the coolest- or the loudest. Our hearts begin to reflect the language, the attitudes, and the morality of the authors and creators of our favorite sitcoms. We become who they are, because that’s what we fill ourselves up with, because we aren’t choosing purposefully. We are the ones who have the power to turn the channel or shut it off-

but we have to make the choice.

If you think your little choices don’t matter, consider this: If you were only to eat what was tasty and cheap, how quickly would your Easy Mac diet destroy your health?

So how is your spiritual diet?

This month, I decided to do a media fast- I’m taking a break from moving images. My family is doing no netflix, no youtube, no Hulu. No television or DVD’s. No electronic games. I’m even having a hard time scrolling through facebook with instantly playing vines and wimp videos. We called it “No Movie March.”

It’s an extreme choice, and my kids have gone through all seven stages of grief. Shock and denial, whining and bargaining, door slamming and mock dying on the couch… but then they moved on to board game playing, snow fort building, library book reading, and tickle wars.

A media fast can be really good for you, even if it’s just one type of thing for a shorter length of time. I once cut out pinterest for a few weeks, and it seriously broke my addiction.

I’m not saying you have to do this. But I’d like you to take a minute and consider what stories are filling your days.

What entertainment holds your interest and is shaping your heart?

15 So be careful how you live; be mindful of your steps. Don’t run around like idiots as the rest of the world does. Instead, walk as the wise! 16 Make the most of every living and breathing moment because these are evil times. 17 So understand and be confident in God’s will, and don’t live thoughtlessly.

Whether it’s books, videos, or buzzfeed lists, what is one way you can be more purposeful about what you’re consuming?