Isn’t it amazing how the Lord can use almost anything to teach us about himself… and show us more of ourselves?

This week, a series went around through my facebook friends about films and the impact they had on us. The “copy-paste” thing said to post one poster per day for ten days of films that made an impact on you.

I made up my list fairly quickly- some dramas, some children’s movies, some comedies. The first one, at the top of my list, was Amadeus. 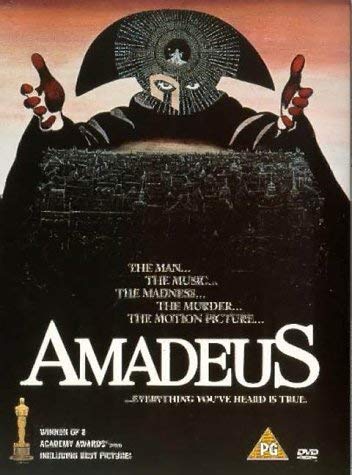 Amadeus is a lavish, amazing movie about Wolfgang Amadeus Mozart. I first watched it when I was a young teen, because I loved music and wanted some future as a musician. Before I went to post it as one of my ten films, I wanted to watch it again, because I couldn’t remember if there was anything that I wouldn’t recommend to young viewers. Apparently I originally saw the PG version? Or perhaps an edited version. But when I watched it this time, I saw a “director’s cut” that had a few nude scenes.

The other reason I wanted to watch it again was because as soon as I started thinking about this movie, parts of the plot started to remind me of things I have been talking to the Lord about… and I wondered whether it hadn’t resonated with me only because of the music genre, but because something in the message of the movie was speaking to a major heart-theme in my life.

If you’ve never seen Amadeus, it is a fictional account of a man named Salieri. He was a real life contemporary colleague of Mozart, and in this historical fiction, Salieri is portrayed as someone who is extremely envious of Mozart’s gift from God. 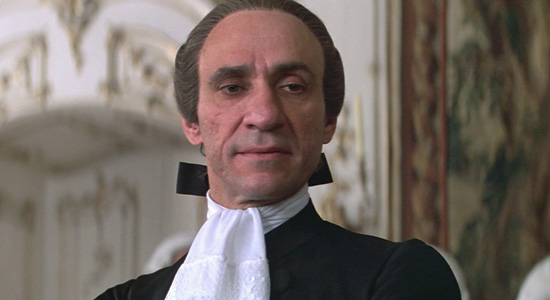 As I started watching the movie, I remembered how sympathetic I felt towards Salieri. He loves music, and in the beginning of the film, he makes a “deal with God,” saying, “I will give everything to you- my life, my work, my money, my chastity. If only in return you will allow me to create music for you.”

And at first, he has some success. It’s as if the Lord answers ‘yes.’ But before very long, Mozart shows up on the scene. Mozart, who in the film is shown to be an air-headed, vapid, womanizing drunkard.

Salieri is aghast when this horrible depraved creature then proves that he is blessed with the gift of divine, almost supernatural music. 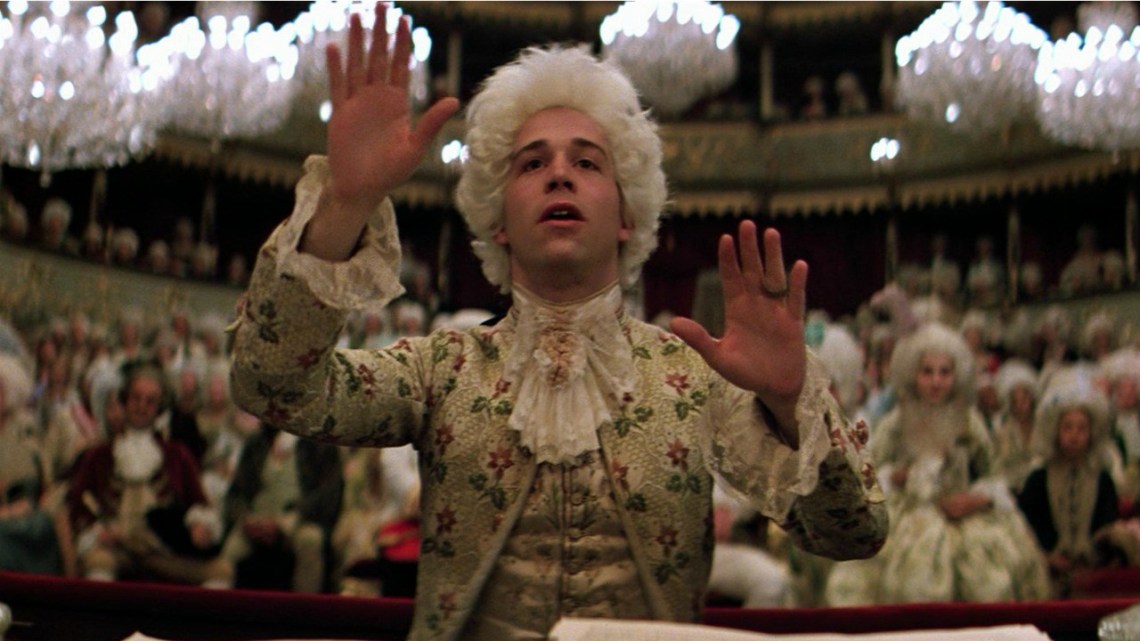 This first half of the movie, where Salieri reels from this seeming unkindness of God, is what I really remembered. I haven’t seen the movie in years, but I could remember feeling such empathy with Salieri. In fact, even before I opened the movie to watch it, I started to remember so many instances in my life where I struggled with envy while watching other people succeed and have opportunities to do things I wanted so badly to do.

I remembered grade school, and envying other girls’ white-blond hair and My Little Pony lunchboxes and pink canopied beds.

I grew up and envied other women’s pretty homes and university degrees. I envied my friends who traveled and my acquaintances who succeeded in business. I envied famous singers and popular politicians, talented writers and even inspired preachers. I envied thinner women and smarter children. I even envied kinder, gentler, and harder working people for their virtues!

I am a pro at Envy. And a side effect is this double sided coin I carry- self-loathing and a deep, horrible sense that I should be loved more.

I began watching the film again, with a growing light shining on this massive snake in my heart.

Salieri, halfway through the film, shakes his proverbial fist at God and decides that he will do anything to thwart Mozart, to get revenge for what the Lord has “done to him.” He goes quickly down a dark path of slander, manipulation, and depravity of his own sort, and without ruining the movie for you, (because this is just history) he watches Mozart lead his short, ruinous life before dying as a pauper.

As the final scenes began, I was so desperate to know the outcome. I couldn’t remember. Would Salieri ever repent? Did he ever somehow redeem his mis-treatment of Mozart? Would he have some revelation from the Lord, and reconcile his heart? What would be the conclusion? Would he ever, at all, relent and be free of the monster of envy that consumed him?

I felt as if watching Salieri’s redemption would somehow give me a clue for my own. How do we stop envying and rejoice in other’s successes?

But sadly- the film gave me no answer! As the final requiem played and the credits rolled, I sat feeling unsatisfied. (Spoiler) Salieri never reconciles with God. There is no resolution, there is only his continual railing against God’s ways, even to death.

I wasn’t content. I had to have an answer! I started scrolling through reviews and comments on Amadeus, thinking that maybe some other viewer had understood better than I.

Apparently the film was not only a critical success, but has been performed live as a play in many, many places. I think that in addition to being a lavishly decorated, costumed, and captivating peek into one of the most famous composers that ever lived, the issue at hand- this conflict with the divine- resonated in many of us.

But how could the film writer leave it unresolved?

I brooded on this a little while. How to kill envy? How to overcome and restore the broach of relationship with God that it causes? Did no one know the answer?

And then, one beautiful paragraph-long summary of the film gave me a glimpse- because the writer called Envy by another name.

Ingratitude caused the Pharisee to be discontent with what the Lord had allotted him, and to complain, “Why does he get paid as much as I do? Haven’t I worked harder?”

Ingratitude caused Salieri to spit on the Lord’s gift to him, and give himself over to the base desire to destroy another.

Ingratitude causes envy, and is itself a symptom of pride- we look at ourselves, and expect better. We look at others, and we want what they have. We see all the reasons why we deserve better, and they deserve less.

How many times have I wanted more and been discontent? How much of my life has been spent praying for things I thought I should deserve, and envying others who had it?

I immediately remembered the beginning of James 4.

What causes fights and quarrels among you? Don’t they come from your desires that battle within you? You desire but do not have, so you kill. You covet but you cannot get what you want, so you quarrel and fight. You do not have because you do not ask God. When you ask, you do not receive, because you ask with wrong motives, that you may spend what you get on your pleasures.

You adulterous people,don’t you know that friendship with the world means enmity against God? Therefore, anyone who chooses to be a friend of the world becomes an enemy of God. Or do you think Scripture says without reason that he jealously longs for the spirit he has caused to dwell in us? But he gives us more grace. That is why Scripture says:

“God opposes the proud
but shows favor to the humble.”

Submit yourselves, then, to God. Resist the devil, and he will flee from you. 8 Come near to God and he will come near to you. Wash your hands, you sinners, and purify your hearts, you double-minded. Grieve, mourn and wail. Change your laughter to mourning and your joy to gloom. Humble yourselves before the Lord, and he will lift you up.

Isn’t this what the real issue is? When we wrestle with God, isn’t it because our inner self thinks that we deserve more, and God is withholding from us?

I want to know more than Salieri knows. I don’t want to grow further depraved and hideous with hatred and malice, and die with a sneer on my face!

Instead, I want to leave behind this constant turmoil of envy, malcontent, and grumbling inside of me. I want to to stop letting myself think I deserve better-I want to go on from this silly quarrel that Salieri and I have had with God- and to rest in his portion for me, because I know that’s where real peace is! I want to stop looking on other people’s gifts as evidence that they are loved more, and I am loved less.

And I think that it begins with gratitude, true appreciation and acknowledgement to God that everything I have is by his mercy and grace. To see everything I enjoy as a gift from him and to remember that I am owed nothing.

As if the Lord is shining his flashlight on a poisonous viper, I take the sword of truth, and hit it with a deathly blow.

I raise my hymn of thanks and Envy will have no hiss left in me.