I love to know you, Jesus. I want my study to reveal you to me and to everyone who reads this.

In the last chapter of John, it reads:

At the end of the two days, Jesus went on to Galilee. He himself had said that a prophet is not honored in his own hometown. Yet the Galileans welcomed him, for they had been in Jerusalem at the Passover celebration and had seen everything he did there.

This is so interesting- a prophet is not honored in his own hometown. This seems logical. If you’re something special, often the people that know you best know the human side of you and it makes the extraordinary less interesting to them. Especially if the human side of you is something they really disdain or dislike. An actor might go away to Hollywood and be adored, but his hometown remembers a whiny boy who never did his share of the work.

And yet, for Jesus this is not true. It says the Galileans welcomed him, because they saw the miraculous things he did… and presumably they heard the things he taught. Did they also remember his years of living in the middle of them? If they did, nothing about his life or character made them turn their noses up.

I think about this in my own life. I want so much, as I’ve said so many times before, for the people around me to know the hope that I know. I want to share the light and the the peace that I’ve found. But if the people that I rub elbows with see a life in me that is nothing worth admiring, why would they listen to anything I have to share?

As he traveled through Galilee, he came to Cana, where he had turned the water into wine. There was a government official in nearby Capernaum whose son was very sick. When he heard that Jesus had come from Judea to Galilee, he went and begged Jesus to come to Capernaum to heal his son, who was about to die.

Jesus asked, “Will you never believe in me unless you see miraculous signs and wonders?”

Then Jesus told him, “Go back home. Your son will live!” And the man believed what Jesus said and started home.

While the man was on his way, some of his servants met him with the news that his son was alive and well. He asked them when the boy had begun to get better, and they replied, “Yesterday afternoon at one o’clock his fever suddenly disappeared!” Then the father realized that that was the very time Jesus had told him, “Your son will live.” And he and his entire household believed in Jesus. This was the second miraculous sign Jesus did in Galilee after coming from Judea.

So Cana again. First, the water into wine. And now this. Isn’t it interesting, what he says before he performs the miracle? It seems like a reprimand.

“Will you never believe in me unless you see miraculous signs and wonders?”

But look what he does afterwards- he performs the miraculous sign and wonder. He points out our weakness, but he also provides for it.

He cares about our worries. This reminds me also of a verse in Philippians:

Do not be anxious about anything, but in everything, by prayer and supplication, with thanksgiving, let your requests be made known to God.

Who does Jesus prove to be in this passage?

One who meets us, fallible and weak, and hears our worries, and takes care of them.

What are your weak areas these days? Where do you need him? This the point of Christianity: that the parts of our lives that are the messiest and the ugliest and the weakest, these are the places he looks right at, and brings hope and healing and answers to.

There is always an answer in Christ. Always. He always has the answer… and do you know what? He will always answer you when you call.

The whole, entire, point of being a Christian is to know Jesus- and the way we know him is that we search him out, like this official did. We find him and we beg- “Jesus, I need you.” And when we’re at his feet, when we call his name, he looks down, and he sees our weakness, and he meets us in our needs.

This is who Jesus is. In fact, in the book of 2 Corinthians, Paul talks about how he loves his weaknesses, because that’s where Jesus is showed to be his strongest. Here is is from the Voice.

So ask me about my thorn, inquire about my weaknesses, and I will gladly go on and on—I would rather stake my claim in these and have the power of the Anointed One at home within me. I am at peace and even take pleasure in any weaknesses, insults, hardships, persecutions, and afflictions for the sake of the Anointed because when I am at my weakest, He makes me strong.

This is such a strange concept for me. Remember at the beginning of this entry, where I said how I wanted my life to not have things in it that were “less than admirable?”

There’s this funny double-thing in Christianity. On the one hand, when we belong to Jesus, it’s supposed to help! To make things better! And so we tend to hide the things that are ugly and messy. We try to present a tidy picture to the world, because… why? Sometimes it’s because we are ashamed of ourselves, but other times it’s just because we want to glorify the Lord! No use whining about our troubles, if it means that we’re saying Jesus is less powerful. Right?

But the strange thing, to me, is that we can have ugly places, still, in our lives, that everyone else can see. People know if you still have an anger problem or you flirt too much or you eat too much or you don’t pay your bills. You can paint a pretty good picture, but not to everyone, all the time.

“The Lord is working on that in my life. And I know it will get better, and let me tell you what he’s already done…”

That should be our stance. We should boast in our weakness. Because when we freely admit our humanity, when we recognize in humility where we need the Lord, both to the Lord, and also to others, that’s where they see that they can have their needs met. 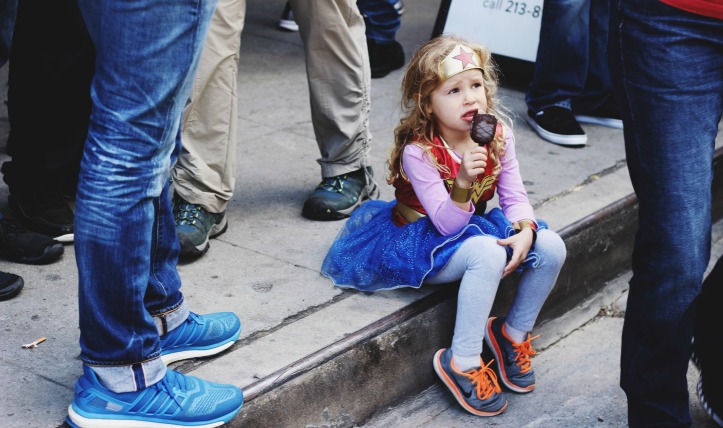 If you want to read more, this is part of a series going through the book of John! Just click here.